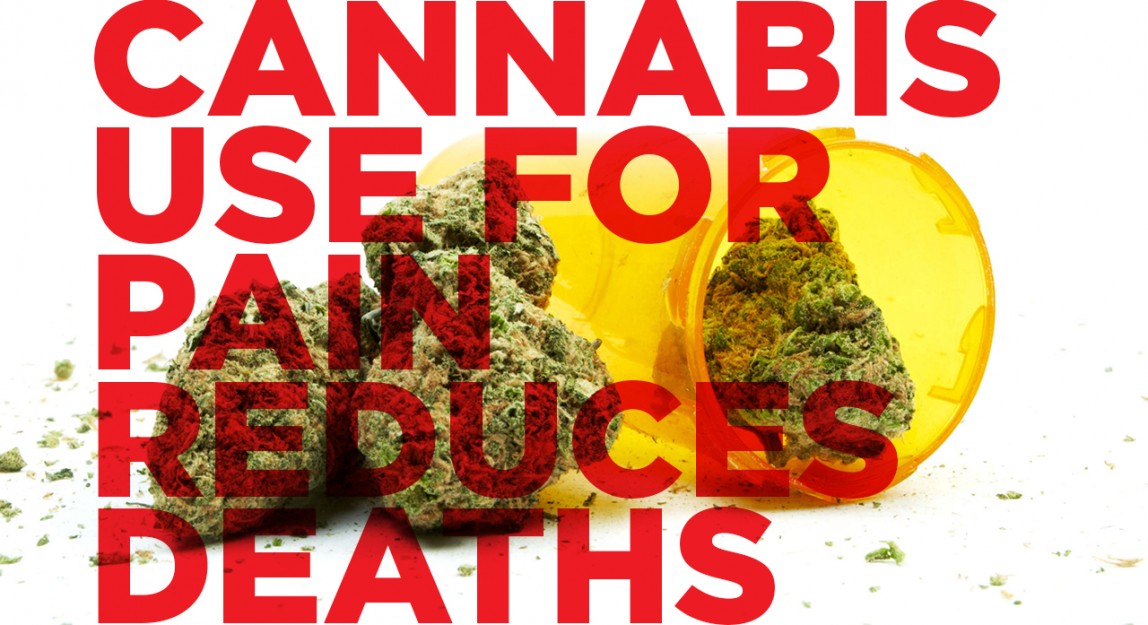 CANNABIS USE FOR PAIN REDUCES DEATHS BY PRESCRIPTION PAIN KILLERS

In 2014 the Journal of the American Medical Association did a study that uncovered a fascinating bit of information.

In every single state that had legalized medical marijuana from 1999-2010, there were 25% less fatalities due to overdose of legally prescribed opioids. In these states cannabis use for pain maybe the reason for the reduction of deaths from prescription pain killers.

This is not a small insignificant number! In fact every day 46 people die of such overdoses in the United States.

Co-author Colleen Barry, a health policy researcher at Johns Hopkins Bloomberg School of Public Health in Baltimore says that the “The difference is quite striking.” The swing showed up remarkably fast and was visible the year after medical marijuana was accepted in each state.

Researchers think that in states where medical marijuana can be prescribed, patients may use marijuana to treat pain, either instead of prescription opiates, or to supplement them—and may thus require a lower dosage that is less likely to lead to a fatal overdose.

A more recent study at the Hebrew University in Israel found that long-term use of cannabis is associated with improved painkilling and reduced opioid use in patients with treatment-resistant chronic pain conditions, according to clinical trial data reported online ahead of print in The Clinical Journal of Pain.

Researchers evaluated the use of cannabis on pain in a cohort of 176 patients, each of whom had been previously unresponsive to all conventional pain medications. Subjects inhaled THC-dominant cannabis daily (up to 20 grams per month) for a period of at least six months.

The majority of participants (66 percent) experienced improvement in their pain symptom scores after cannabis therapy. Most reported “robust” improvements in their quality of life. Subjects’ overall consumption of opioid drugs declined 44 percent by the end of the trial, and a significant percentage of participants discontinued opioid therapy altogether over the course of the study.

The study determined, “In summary, this long-term prospective cohort suggests that cannabis treatment in a mixed group of patients with treatment-resistant chronic pain may result in improved pain, sleep and quality of life outcomes, as well as reduced opioid use.”

The Israeli study confers with the results of a similar study done in 2015 in Canada. This research found that chronic pain patients who use herbal cannabis daily for one-year experienced reduced discomfort and increased quality of life compared to controls, and did not possess an increased risk of serious side effects.

And yet another study from the RAND Corporation, reported in 2015, showed more evidence of positive pain reduction, concluding, “States permitting medical marijuana dispensaries experience a relative decrease in both opioid addictions and opioid overdose deaths compared to states that do not.”

Finally, A scientific review published earlier this year assessing the clinical use of cannabinoids for pain in over 1,300 subjects concluded, “Overall, the recent literature supports the idea that currently available cannabinoids are modestly effective analgesics that provide a safe, reasonable therapeutic option for managing chronic non-cancer-related pain and possibly cancer-related pain.”

Though some claim the jury is still out on this research, these studies revealed some great data and a strong argument for those who believe in ending cannabis prohibition.